The history of Spain is extremely rich in dramatic events. Many a devastating war has been fought, many a rebellion occurred, and many a ruler changed here since the dawn of time.

Why Are There So Many Castles in Spain?

In the Middle Ages, Spain would remain under control of the African Muslims (Moors) who had occupied most of the Iberian Peninsula in the early 8th century. However, in the second half of the 8th century, recapture of Christian lands began. Reconquista or the Reconquest lasted till the end of the 15th century.

The above historic events have left an ineffaceable trace on soil of Spain.  The multiple fortresses, castles and watchtowers built both by the Moors, the Christian kings, and the local people would be erected throughout the country.

The number of castles (castillos in Spain) ever built in Spain is believed to total 10 thousand. The ones survived for the time being are said to number about one thousand; at that, the official sources would fail to provide the precise number.

The Costa Blanca castles, all of them rising at strategic locations, would serve their original purposes of defense for long centuries. Today these fortified structures   recognized as historic monuments have become amazing attractions included in most popular tourist destinations. We have prepared a rating scale for the Costa Blanca castles of our own. You may visit the sites either by yourself or guided by us. During our tour, we shall help you take a look in the historical past and get familiar with the cultural traditions of the peoples who inhabit the ancient soil of Spain.

The town of Villena lies 60 km from Alicante. The Atalaya Castle was built in the 12th century by the Moors who had erected the structure over a Roman castrum or villa. The castle would repeatedly occur at the centre of fierce battles. A French invasion in the 19th century, however, proved to be the most devastating and destructive event suffered by the fort. The castle, all in ruins, remained abandoned till 1958 when its rehabilitation was started. By the end of the 20th century, the castle had been fully rehabilitated; nevertheless, the campaign on its restoration is going on till today. Its circular and semicircular towers, toothed curtain walls rising against a blue sky propose a typical visual image of a Spanish castle. The Archaeological Museum is another place worthy of visiting after you have seen the castle. There you will see the Treasure of Villena – gold, silver and amber items of amazingly thin handicraft, made over 3 thousand years ago. 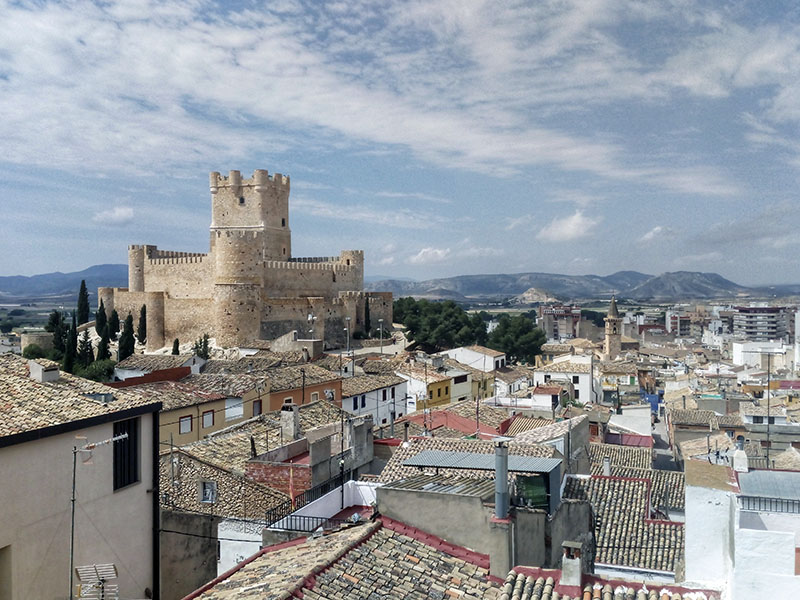 The Santa Barbara Castle in Alicante is actually a visit card of the city. The castle stands on Benacantil Mount rising at a height of 166 m above sea. The castle is located within walking distance of both the urban beach and the city center. The first stone was laid in the base of the castle in the 9th century, in the times of the Moorish rule. During its long life as a fortified structure, the castle underwent several expansion efforts. In the 18th century, Santa Barbara lost its military significance. During the Civil War (1936-1939) the castle was used as a prison but later on it was abandoned and neglected. After a refurbishment undertaken in the 1960s, the castle was open to the public and soon became the most frequently visited site in Alicante.

Ascend to the castle is provided by a passenger elevator installed opposite the Central urban beach. Those who prefer to climb up on foot may follow a walking path starting in the center of the city. The castle Santa Barbara is also accessible by car. There are a parking in the lower level. 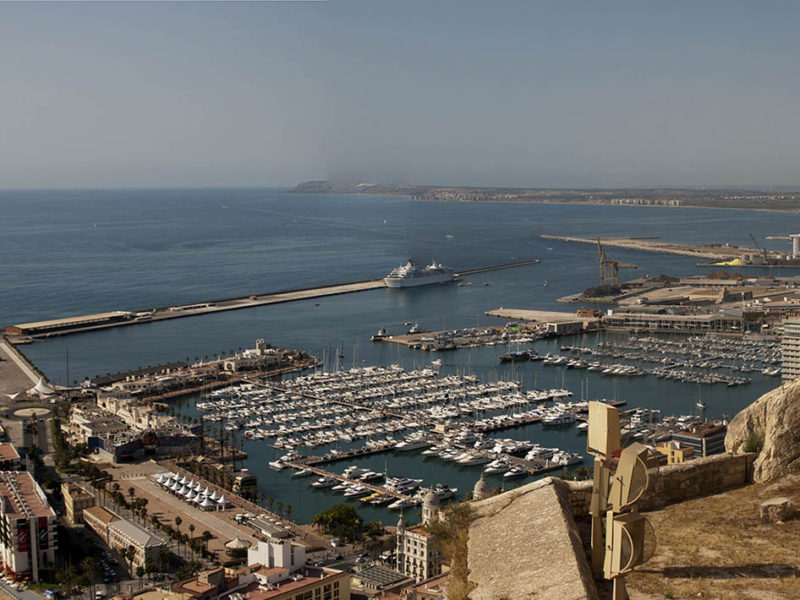 The Castle in the Town of Biar

Owing to its strategically favourable location, the town of Biar would always be a part of the country’s integrated defense. Beginning from the 12th century, the town became the subject of claims of both the Moors and Christian kings of Castile and Aragon. The castle of Biar stands on a hillock rising at the height of 750 m above sea level. Initially, the castle had been enclosed by three rows of massive curtain walls. The outer wall that used to surround the town completely, has not survived. The castle would retain its defensive significance till the 14th century when, by the order of Ferdinand, King of Aragon, it was handed over to the Biar urban community.

For its long-century history, the castle has suffered several refurbishments. The architectural style in which the structure is designed is actually a mixture of several styles. No tour about the valley of the Vinalopo river will ever miss the opportunity of visiting the Biar Castle. And, of course, neither shall we.You should by your own eyes see the special beauty of the round corner towers of the castle and its central square-shaped tower rising to the height of 19 m and thus dominating the environs.

The castle in the city of Sax is one of the most monumental fortifications in Costa Blanca. The castle stands on a high cliff and, owing to its position, dominates the whole city. The keep, whose foundations are laid over a cave, and the bastion tower are the elements that have survived to the present day. This fortress of military glory, likewise the Biar and Villena castles, would ever withstand any attacks or sieges. The architectural volumes of the castle follow the slope of the cliff so its square towers and toothed walls are well seen from afar. The castle looks especially beautiful in the evening, when illuminated by floodlights.

Opening hours of the castle: From 10.30 till 12.30 on Sundays. Visitors are only allowed as participants of a tour booked in advance.

Entrance fee: € 3 (you are advised to double-check the latter before the visit).

Castle of La Mola, the City of Novelda

On the top of La Mola hill, there lies a castle of the same name. The history of the La Mola Castle is almost the same that those of the other castles in Spain. Built in the 12th century by the Moors, the castle was afterwards won back and came to the ownership of Christian kings. Throughout the course of its history, the castle has changed more than one hand the majority of which belonged to royal families. Despite the above, however, the castle was successively abandoned and dismantled. Today it is being rehabilitated and is well worth a visit.

The castle is really unique, the only one of its kind. One of the towers in the castle ensemble is triangle-shaped. The design effort of the ancient builders who seem to have managed to cognize a faint mysterious spirit of the surrounding landscape resulted in getting a wonderfully fortified castle which has survived in spite of the numerous sieges it has had to stand. From the top landing of the triangle tower, there opens a marvelous view over the outskirts and the  St. Mary Magdalene Church where motives of the legendary Antonio Gaudi’s architectural gift so brilliantly incarnated in the Holy Family Cathedral in Barcelona can be traced. 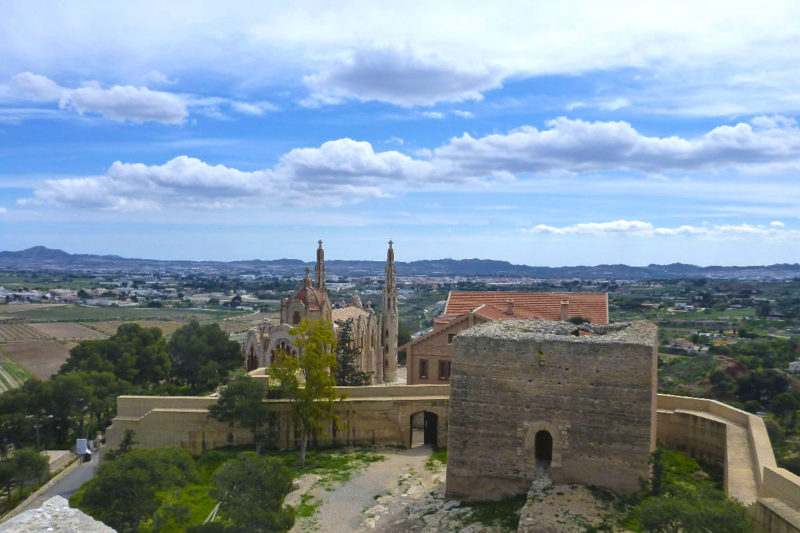 Castle in the Town of Guadalest

This small town with a population of just over 200 people will receive more than 2 million tourists per year. Guadalest is rightfully called “an open-air museum”. Its houses seem to sprout out of the rocks; beneath them, lays the Guadalest dam. At the highest point of the cliff towering over the old walled town, the San Jose Castle built by the Arabs in the 11th century can be seen.

The castle that was once very important due to its strategic location comprises two interlinked fortresses. These fortifications would continuously get damaged as a result of endless military events; afterwards, they suffered greatly from three major earthquakes. Consequently, the curtain wall within which the ensemble used to be enclosed went to ruin. Later on, to provide safe access for tourists, steel stairs were installed there.

From the Alkasaiba castle tower, an amazing view over the Guadalest valley opens. The other fortress, “King’s Castle”, is erected on the peak of the cliff; owing to that, the castle has acquired its poetic nickname – “Eagle’s Nest”. The tower would be believed secure and risk-free enough to serve as a vault for the money collected throughout the province as taxes. 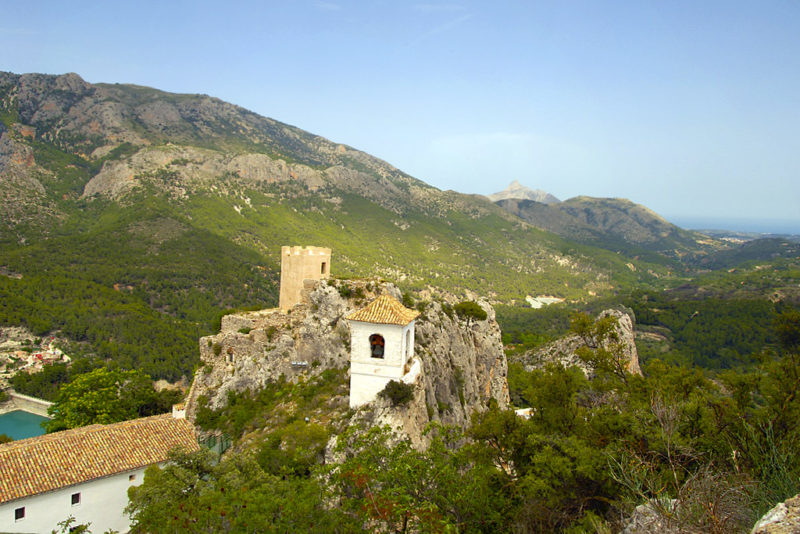 Castle in the Town of Banyeres de Mariola

The castle of Banyeres de Mariola was built in the 13th century. It is irregularly shaped what may mean that its ancient designers had proceeded from the peculiar nature of the local relief. The castle has two enclosures and adapts to the ground. Today, we can marvel at the square-shaped tower of the castle still rising above the hill. Inside the castle, just like in many fortifications, there stands a water tank provided for collecting water in case of a prolonged siege. The main attraction for the tourists coming here is the celebration of “Arabs and Christians” (Moros i Cristians) festival commemorating the fierce combats that have taken place there within the period from the 8th through the 15th centuries.

Ancient Castle in the Town of Petrer

No tour will ever leave out the Petrer castle that though built in the 11-12th centuries has preserved its wonderful original image. The majestic silhouette of the castle crowns the hill it stands on. A marvelous view over the valley of the Vinalopo River opens from the castle. And you cannot help but start fancying of medieval knights standing on patrol on the castle walls to watch the approaching enemy.  The castle owes its name to the town it used to defend. Centuries would pass by, the castle’s owners would change, but the fortification would ever remain faithful to its suzerains. In the 15th-16th centuries, the latter were kings of Aragon and then Castilian nobles. The Petrer castle even happened to be involved in the 20th century Civil War. In those times, it served as the residence of the Republican Government of Spain.

At full moon, the city authorities will traditionally arrange free tours round the town and the castle; these dramatized shows are known as “Petrer in the Moonlight”. The tours are very popular among tourists so you are advised to book one in advance, about a month earlier.

Work schedule: Only guided tours conducted in Spanish are held at 11.00, 12.00 and 13.00 o’clock on Tuesdays through Sundays.
Participation fee: free of charge.

The Altamira castle has got one more name – Senioria Palace. It is one of the most beautiful buildings in the city. A major square tower erected in the 12th-13th centuries by the Moors is the core of the architectural design of this remarkable ensemble. The other structures comprising the ensemble were added later. As a result of the above construction effort, there appeared a polygon-shaped structure with round towers at corners. The building has been for various destinations, first as a jailhouse and then even as a footwear factory. In spite of all the twists and turns it has had to experience, the Altamira castle, a perfect embodiment of the best traditions of the medieval art of building, has remained well-preserved. The vicinity of the picturesque palm orchard adds a bit of special charm to the historic site.  Today, the castle accommodates the Archaeological Museum. The tour to Elche includes a visit to the Altamira Palace. 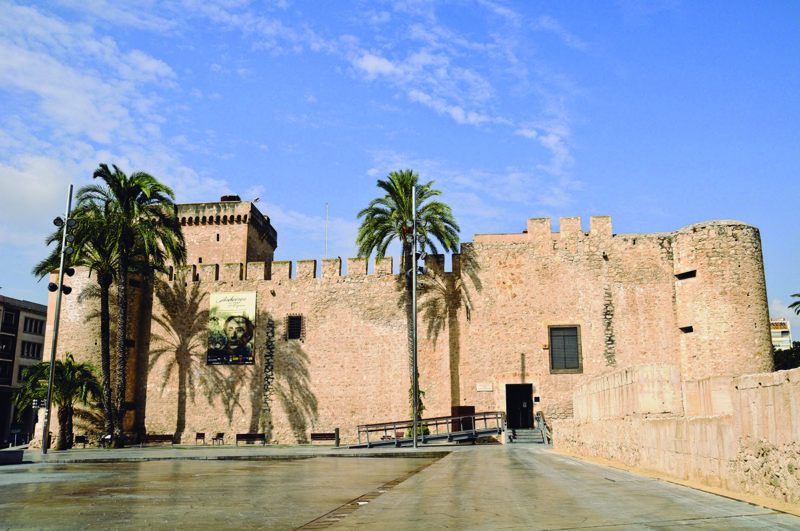 In the heart of the small resort town of Denia, there stands a well-preserved castle built by the Arabs in the 11-12th centuries. As long as till the 19th century, the Denia castle would retain its military and managerial importance. For a while, the building has even happened to serve as the residence for a local governor. Then, it stood abandoned for long years and even was nearly pulled down; in the end, fortunately, the castle was bought out and rehabilitated.

At our company, you may at any time book either an individual or a group tour of the Costa Blanca castles.