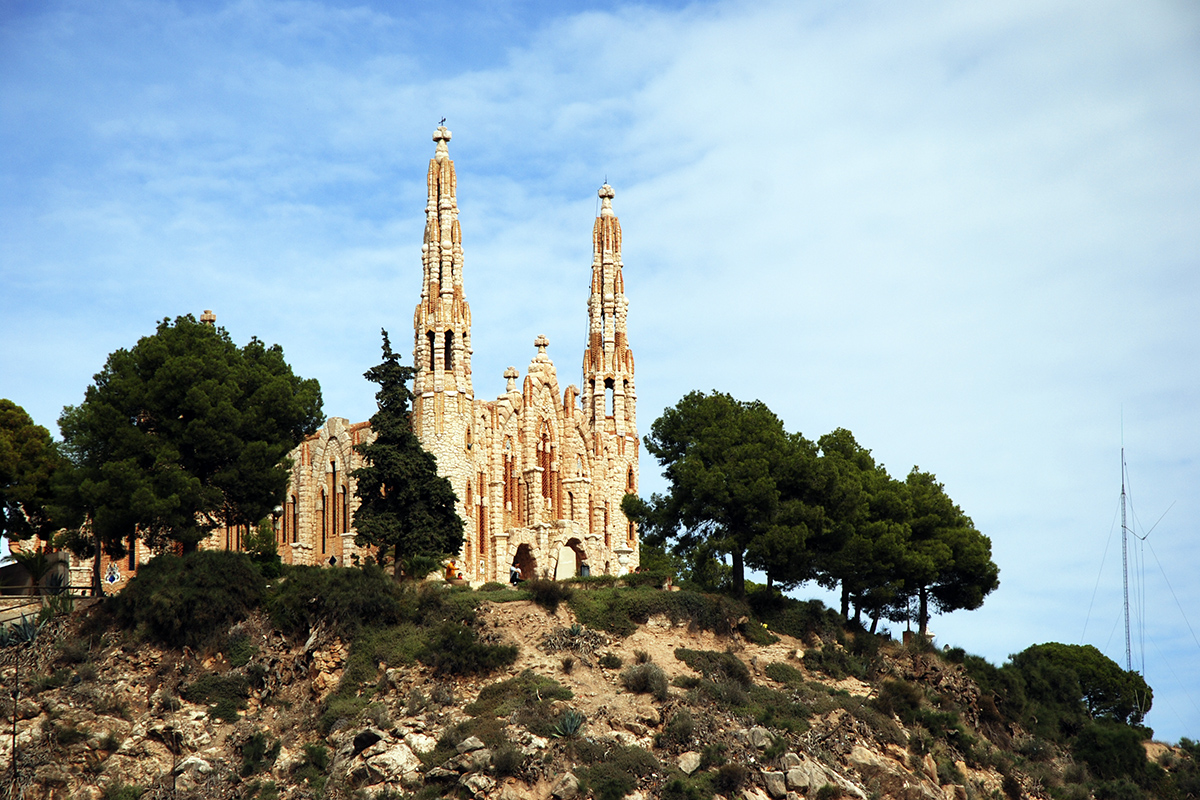 Novelda impress by its architecture and the atmosphere. The small city has a lot of buildings in the modernist Style with the most famous santa Maria Magdalena created by antonio Gaudi disciple

Not far from Alicante, there lies a small town of Novelda known mainly for its marble quarries, table grapes and production of saffron. However, it is far from being the all Novelda is famous for…

The main sight to visit in Novelda is a cathedral of a stunning beauty, known as Sagrada Familia in miniature.

The trapezoidal plan of the church designed by Jose Sala Sala, recalls the shape of the vessel containing the holy oil used by Mary Magdalene to anoint Christ. It is the only church building in the world shaped like that.

Jose Sala Sala moved to Barcelona to study architecture, and ended up learning with Antonio Gaudi. It was just Gaudi’s main work, the delightful creation of the great architect that inspired his disciple to design the cathedral in Novelda.

Another unique element in the church is its stone organ. It is made of marble excavated in the quarries located near Novelda.

Next door to the above temple, there stands Castillo de la Mola or La Mola Castle built by Spain’s Islamic occupiers in the late 12th century. One of the most peculiar features of the fortress preserved for the time being is a triangular tower the unusual shape of which makes it unique throughout Europe.

Striving to demonstrate their wealth and the refined taste of the upper class, those of Novelda’s residents who had got rich during the industrial revolution of the early 20th century, began to build residences designed in the style popular in Europe in those times – modernism.

Novelda can justly take proud in the magnificent buildings that add unrepeatable grace to the town. Custom-built for the upper-class in the beginning of the 20th century, these buildings well preserved for the time being, include, inter alia, the Museum of Modernism, the Casino and the Gomez-Tortosa House.

Established on the initiative of the local commercial bourgeoisie, the Cultural Society Casino of Novelda has retained its function down to our own days. You will be offered an opportunity to wander through the spacious halls of the marvelous building, relax with a cup of coffee in the luxurious dining hall and, certainly, at last identify yourself as “upper”…

The Gomez Tortosa House was built late in the 19th century and later purchased by Mrs. Antonia Navarro Mira, an outstanding woman of the day who intended it for her daughter. At the initiative of the above lady recognized for her intellect, education and taste, the house was restructured according to the laws of modernism (Art Nouveau), the style of art that flourished at that time. The masterpiece of design got as a result of the refurbishment incorporates all the beautiful features peculiar of the above art style: soft floral patterns, fragile and delicate wood and metal carvings, abundance of long, sinuous, organic lines and emotional and sensory images.

The residence of Antonia proper is still more delightful, amazing with its magnificence and harmonic beauty. Nowadays, the house accommodates the Museum of Modernism. Visitors may enjoy observing the amazing decoration of the interior design of the house each item of which, beginning from the entrance doors with their decorative ironmongery and ending with the glass roof, does indeed stun with its beauty, elegance and refinement.